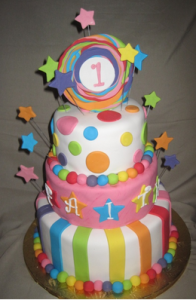 What is your story about birthday cakes? I don’t remember that we ever had a birthday cake for anyone in our family, including 4 girls, when we were growing up. When I was in the 6th grade, my mother surprised me on my birthday by bringing ice cream for the students in my class. A lovely memory.

When I had children I started making birthday cakes, especially since one of my sisters showed me the basics on decorating cakes. I had fun doing it. Share your stories with someone.

My birthday cake story continues with seeing what my daughter has done with birthday cakes. When her oldest daughter was two, she made a beautiful cake with fish on it. Every year, there were more cakes. And as the years went by, her cakes became even more delicious and spectacularly beautiful. Her creativity and investment in making the best tasting and best looking cakes began with a wedding cake for dear friends.

I think this is her 9th year in her Sweet Moments Dessert Company . Although making wedding cakes is probably her favorite order, she loves rising to the challenge of putting together something new for customers. Her Mockingjay cake stands out for me; as does her snake cake. You can view her gallery of birthday cakes and get an idea of the range of cakes she’s made.

How to order a birthday cake in Corona Ca

Laurice thinks that for everyone, ordering a custom made cake should be a simple matter. But she’s learned that some people have difficulty with the details. Without consulting her, I am listing the important elements in ordering a cake from her.

Courtesies and deadlines about an order

Because you are ordering a custom made cake whether it’s a first birthday or a 50tth birthday Laurice needs assurance that you are serious about your order. Down payments by a certain date are required. Full payment is also due on a certain date. Whether you pay through credit card, through Paypal, cash or check, you need to clarify details with Laurice.

In my daughter, Laurice, you will find a talented baker who will deliver the very best she can. Many customers have been thrilled with cakes they’ve received. Here are excerpts from some of her Yelp reviews: 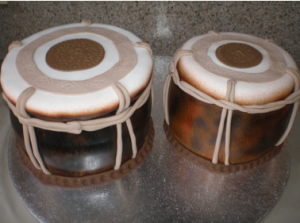 “Laurice bakes with her heart and every bite of our cake and cupcakes had a mouthful of passion, love, and pure decadence. Absolutely outstanding. I couldn’t have asked for anything more. Thank you Laurice for making my daughter’s party so memorable and delicious. You’re the best.”

“Not only was the cake super adorable but it tasted amazing as well! All the flavors were there for our red velvet cream cheese filled cake and it was super dense and moist!”

“I gave her a request and showed her a picture and she made it better than I expected! Delicious too.”

Many of the reviewers are exuberant and excited. Read them for yourself. Hopefully you feel prepared now when ordering birthday cakes in Corona, Ca or from nearby communities.

One Story about Corona Wedding Cakes & Other Cakes Corona Ca

The Beginnings of a Pastry Chef

The story begins when Laurice and her brother were little. One of my sisters had introduced me to cake decorating so I decorated birthday cakes. I remember that it was a lot of fun.

Next scene is at my granddaughter’s birthday party: Laurice made her a cake with fish on it. That was another beginning of the next generation making homemade cakes for special occasions.

Following photo is of a wedding cake that Laurice created her for our good friends’ wedding. She hand-made about 40 beautiful delicate roses, and had perfected her first recipes of chocolate and lemon cake for the tiers. We ooh-ed and ahh-ed about it. The groom saved the top layer of the cake, serving a small portion each anniversary until it was gone. We can say that it was savored.

The Beginning of a Business, Sweet Moments Dessert Company

Some eight years later Laurice now has a thriving dessert company called Sweet Moments Desserts. By now she’s created many many cakes and other desserts.

For desserts I preferred pies to cakes. Notice the past tense. I still prefer pies to most cakes but Laurice’s cakes are something else. Whenever I’m around her kitchen during my visits with them and she’s baking, I can’t resist eating the cake scraps. I try not to eat sweets most of the time but on my last visit, I just gave up and didn’t stop grabbing finger-fulls of cake. Resistance is futile….

My very favorite of Laurice’s cake flavors is her signature flavor: sour cream butter cake. Recently her red velvet cake made quite an impression on me and my sisters. Wow! Not on her list of flavor is a German chocolate which is extraordinary.

But the extraordinary nature of each of her cake flavors are not limited to my current favorites. They all are wonderful because she’s taken the time to find the right recipes that create delicious cakes: moist, not too sweet, full flavors. For the most part, the depth of the flavors is all the butter, eggs, sugar and flour. When you lift one of her cakes you get a surprise: they are heavy because of the richness.

When Laurice was in a culinary class in college, one of her instructors at the end of the class showed everyone what Laurice had created. Her question was: “Everyone started out with the same recipe. Why does Laurice have the only dessert that looks like this?” You get the point: many can have the same recipe but it takes a special cook to get it right. She’s truly gifted in the kitchen.

Most cakes are decorated with butter-cream frosting or fondant. Certain cake designs require fondant “frosting.” Because Laurice cares about flavor she layers butter-cream frosting below the fondant layer (the flavor can be pretty nasty). Consistent with her standard for flavor Laurice usually uses mousseline buttercream for filling and frosting. Again, delicious!!

Probably the best challenge (from my view) of Laurice’s cake creations is the design or theme of the cakes. Recently she made her first MineCraft cakes that consisted of 400 tiny blocks placed around two cakes. It was such a painstaking task that took twice as much time than she anticipated.

I’m remembering how she figured out how to make a Mockingjay for her Hunger Games theme. Then a few years ago she saw a cake that looked like a snake. One of her friends ordered one after Laurice had posted the cake on Facebook. Some of recent favorites include the Animal Barn with all of the animals, and a minion cake (so cute she has a photo of it on her smart phone).

Except for very basic designs, almost every cake presents a creative challenge for Laurice because she wants to please each customer’s vision of their order. There are hardly any two cakes that look alike.

I still don’t understand how she creates the many figures, flowers, logos, items that go on cakes. What I do know is that they usually take hours: time she isn’t compensated for because she feels that her cakes need to priced competitively.

Laurice has taken classes to help her create better figurines as well as other skills from more experienced bakers. Her dream would be to go to a huge cake convention and take as many classes as she could.

She always wants to improve, learn how to make things easier for herself but never forgets that she wants to over-deliver in design and taste with each special cake she creates.

I’ve very proud of this daughter of mine and all that she does—which is more than making cakes and desserts. She’s a super Mom and friend to many.

Let me know what you think about my story on Corona cakes or Corona wedding cakes.

I learned something interesting recently about trying to order a less-than-huge wedding cake in Las Vegas.  You can’t find one anywhere.  A friend-customer of mine needed one for a family wedding–a small cake that would serve 20 people.

Wouldn’t it be a great service to provide such cakes for people who are traveling to Las Vegas from Southern California?  They wouldn’t be custom cakes exactly but my standard very delicious beautiful two-tiered small wedding cake.

Let me know on Facebook what you think of this idea.  Or give me others like it so I can expand what I do.

I’ve never blogged before but I’m open for new adventures especially if it means that I get the honor of adding more sweetness and beauty to someone’s special day.

I intend to add content to these blogs as I learn more things about cakes, recipes, decoration, design, trends, etc.

Let me know what you would interest you.